This command will create a Docker image for the web application. Our application also needs to connect to a database. We will be using the *.Migrator project to create and seed our app's database. So, we need to create a docker image for our Migrator app as well. To do that, run the command below in the same directory (Don't forget to replace MyCompanyName.AbpZeroTemplate with your project name);

Now, we have both Docker images we need to run our application.

This command will create 3 pods on Kubernetes, 1 for SQL Server, 1 for web application and 1 for the migrator app. The default Helm chart uses SQL Server but you can change it if your app uses a different database provider.

Now, if you go to a browser and type https://abpzerotemplate-www, you can visit your published application.

Open the OWASP ZAP application and load the script from "aspnet-core\etc\owasp\abpzerotemplate-mvc\abpzertemplate-mvc-login-script.zst" by clicking the scripts area and then load icon as shown below; 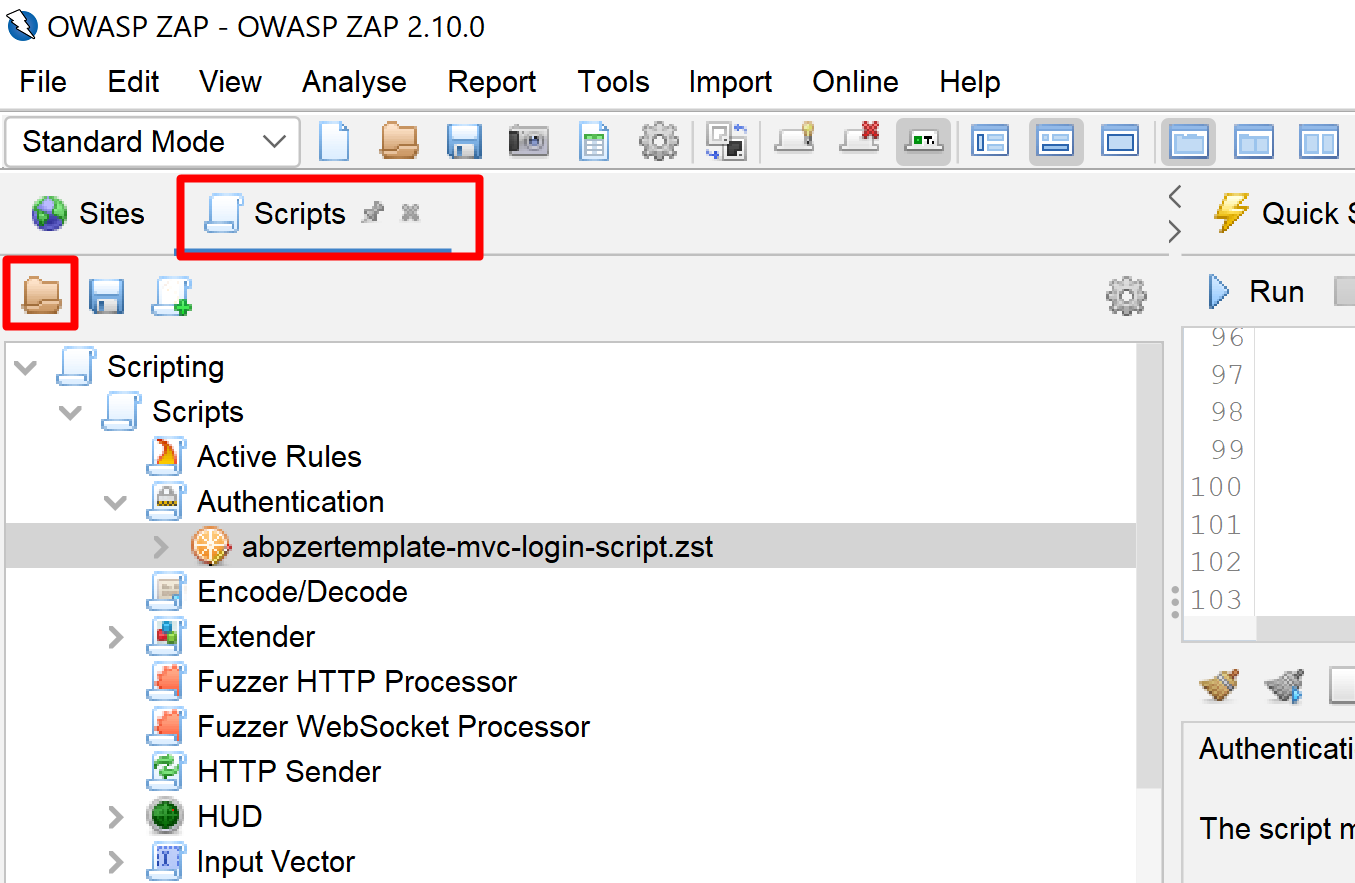 This script will be used to automatically login to the application as the Host user. After that, go to Sites section and load test context from "aspnet-core\etc\owasp\abpzerotemplate-mvc\abpzerotemplate-mvc.context" as shown below;

Sometimes, OWASP Tool doesn't load the context correctly, so check its important items as shown below;

This section must contain the website URL which will be scanned; 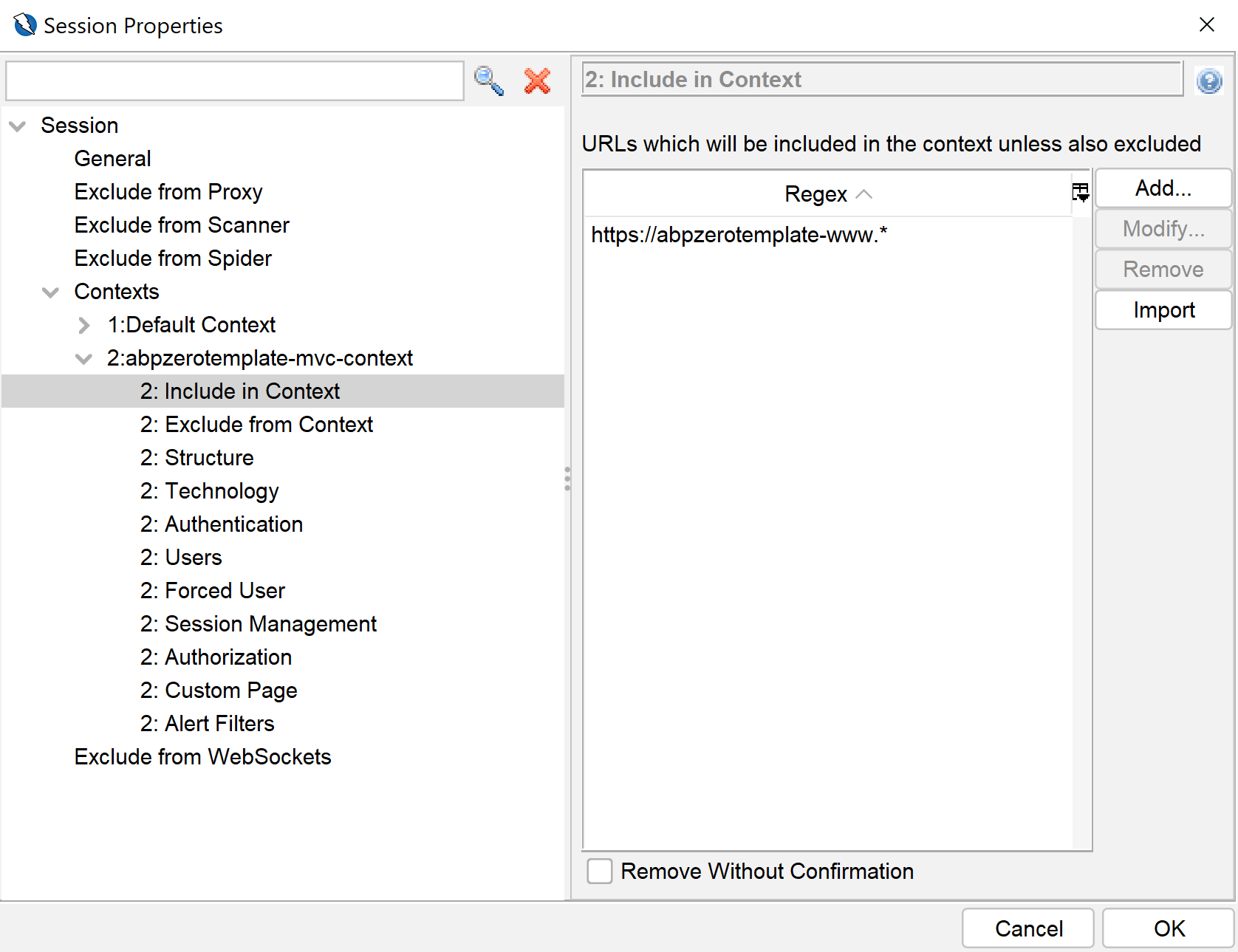 ZAP Tool will be use the Zest script we loaded above for login operation. So, it must be loaded correctly as shown below. If it is not set correctly, please load this script and set the fields marked in red as shown below; 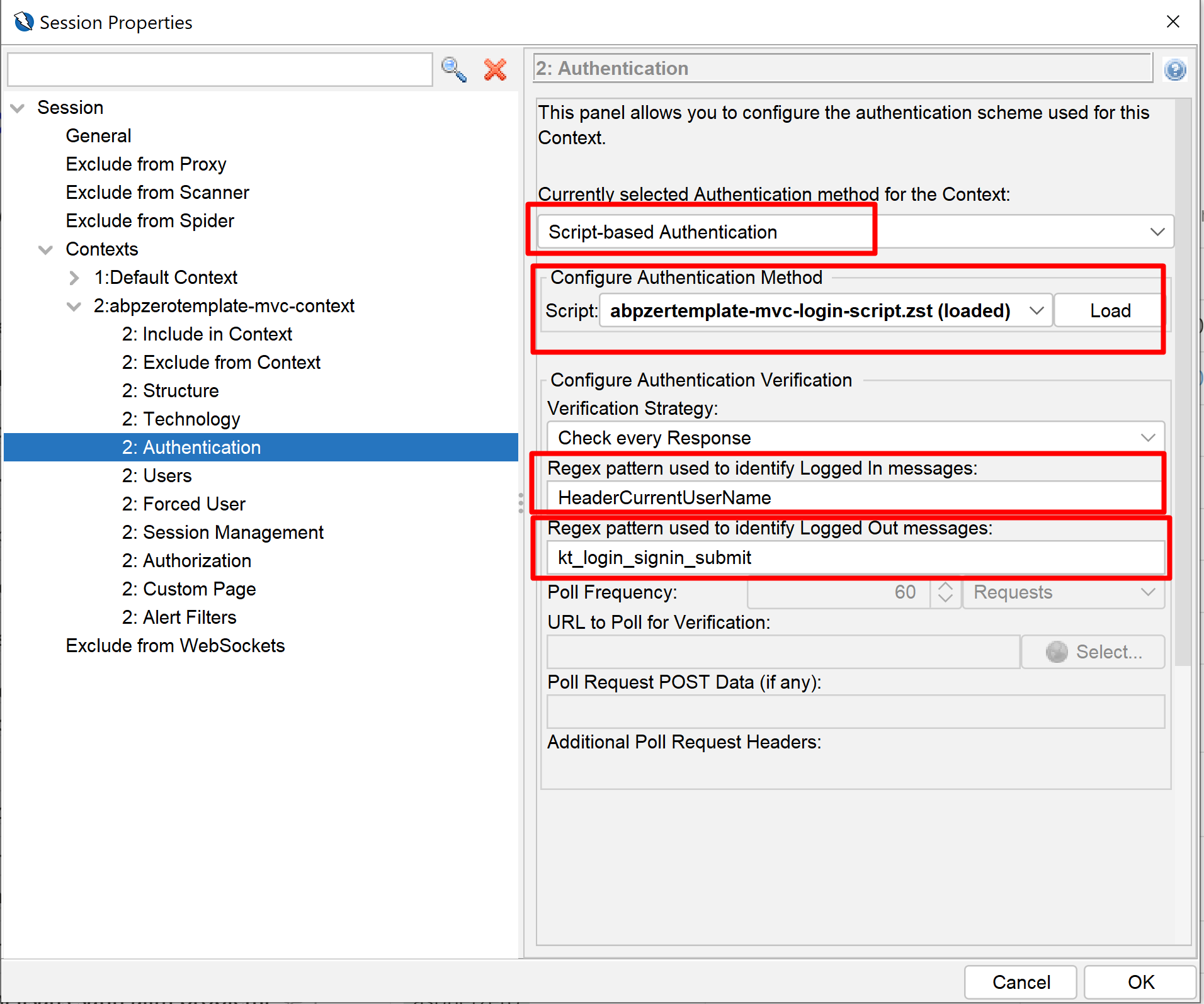 ZAP Tool requires a user to be defined for executing the login operation. So, a user must be defined as shown below; 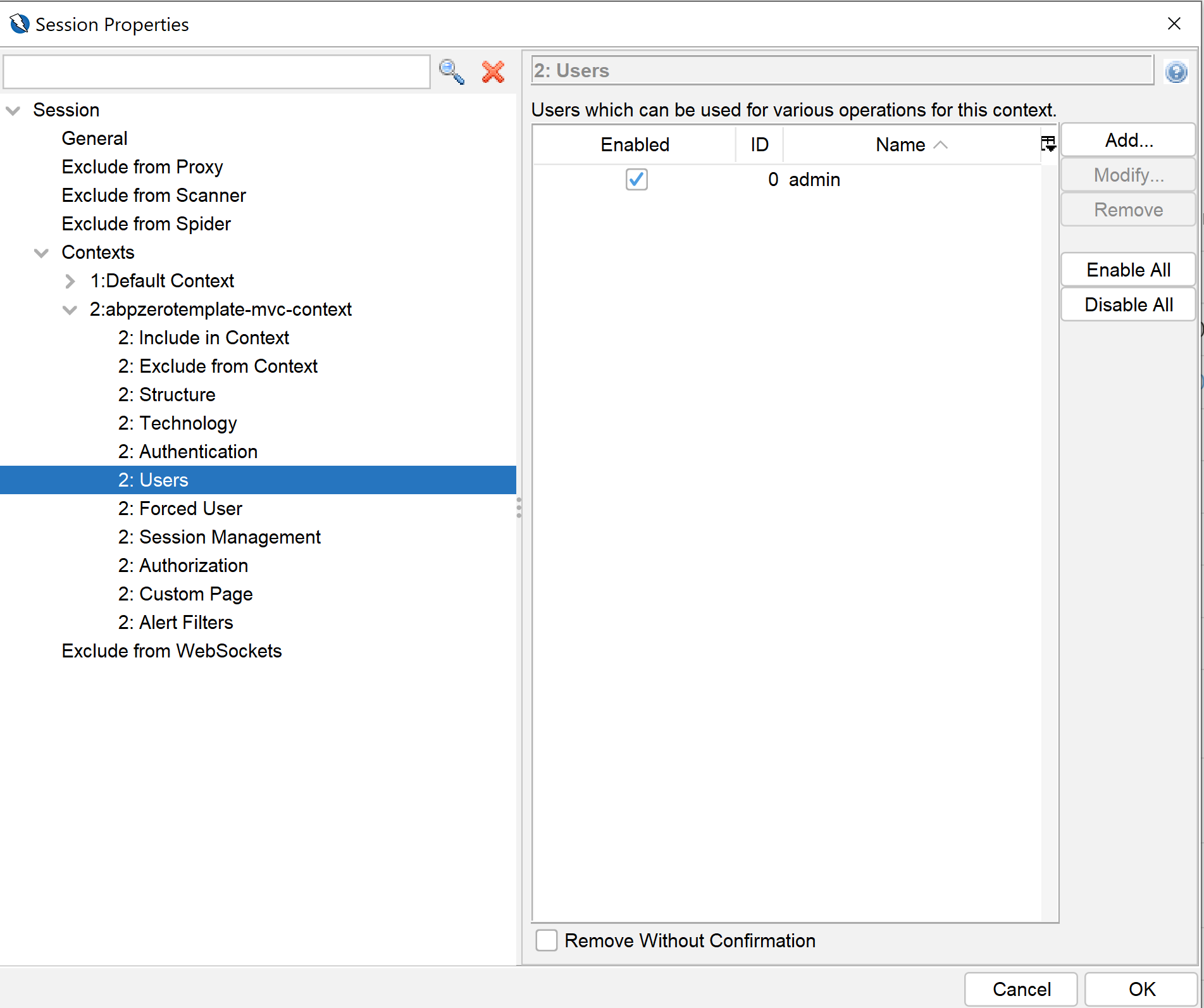 Finally, set the forced user as shown below; 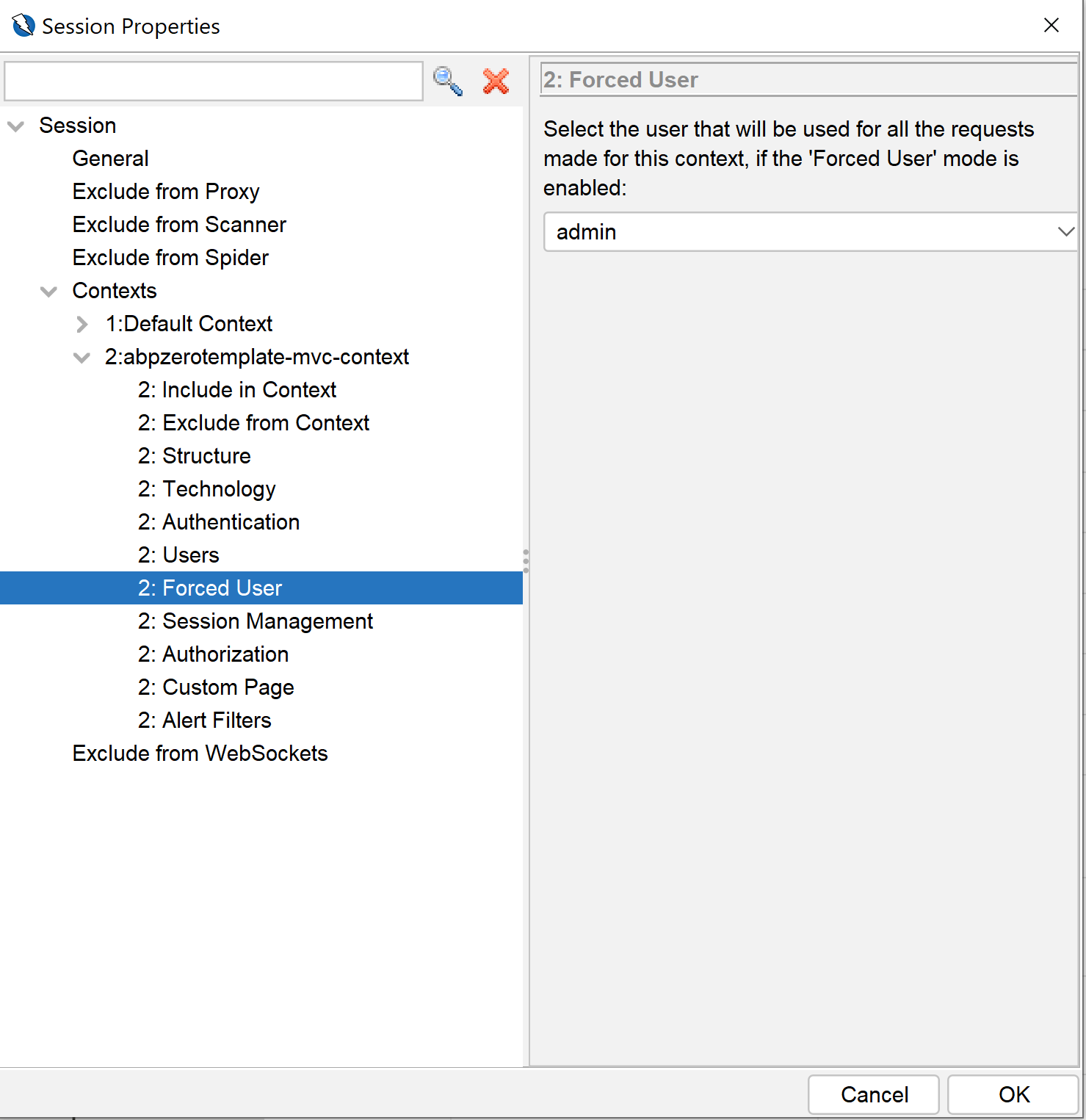 To add your app to ZAP's Sites list, click on the Firefox icon on ZAP Tool and visit the https://abpzerotemplate-www on opened Firefox app. Then, right click on the your site and Click Attack > Spider as shown below;

Select the context we imported before and user we created/imported. This operation will find scan URLs in our application for testing with an authenticated user.

Finally, we can start testing the app. To do that, right click on the your site and Click Attack > Active Scan and select the context we imported before and user we created/imported on the opened dialog and click "Start Scan" button.

The test process might take a long time depending on the page count. When the test finishes, you can go to Report menu on ZAP Tool and generate a report as you wish.