Development with Docker Containers for MVC

ASP.NET Zero aspnet-core folder contains various docker projects for your application to debug using docker containers. You can add these projects to your .Web or .All solutions by Add Existing Project to your preferred solution.

To get started with using docker for development, there are some prerequisites.

1. Setting up the infrastructure

Infrastructure contains mssql-server-linux as a replacement for your LocalDb and redis server for your applications. 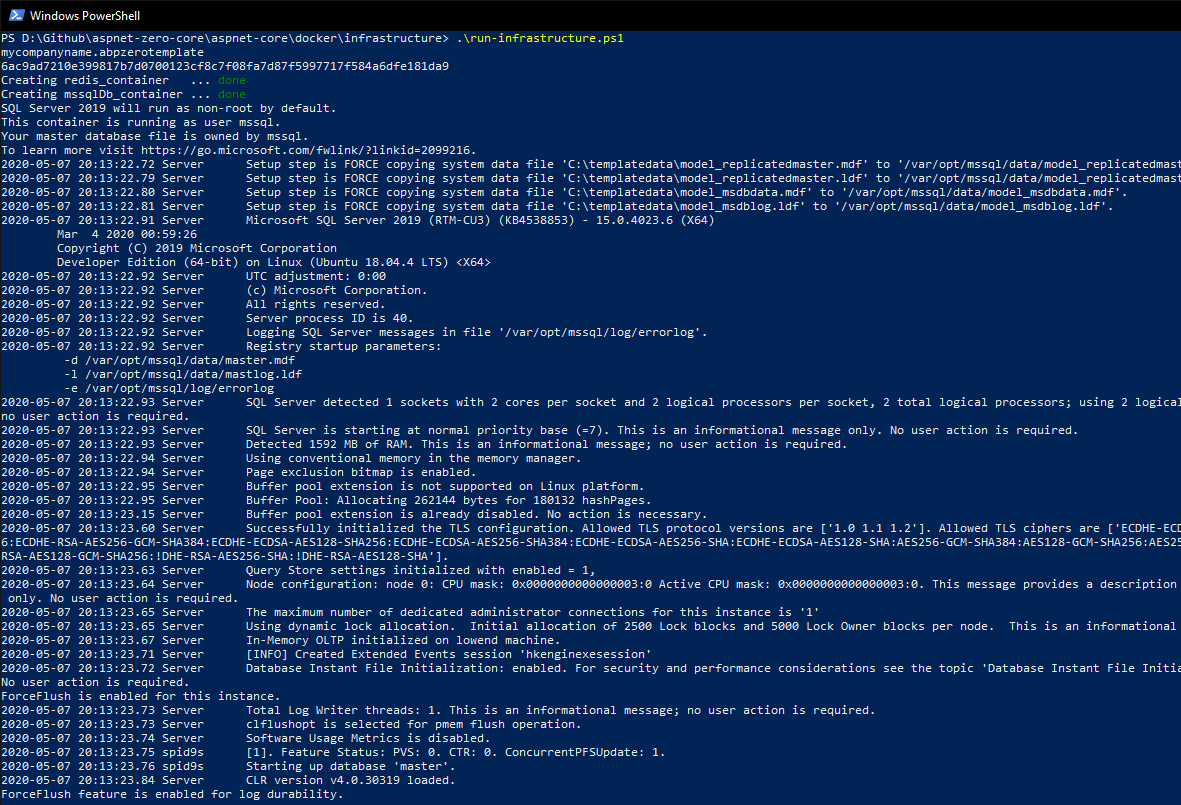 After running the script, powershell will be hanging (non interactive) for you to see if there is any error occurred while creating the containers. You can use Ctrl + X to exit tailing the database logging to make the powershell interactive again.

2. Setting up the self-signed certificate

In your aspnet-core\docker\certificate\ folder, you will find create-certificate.ps1 file to create the certificate. After running the shell script, you should have a similar output like below. 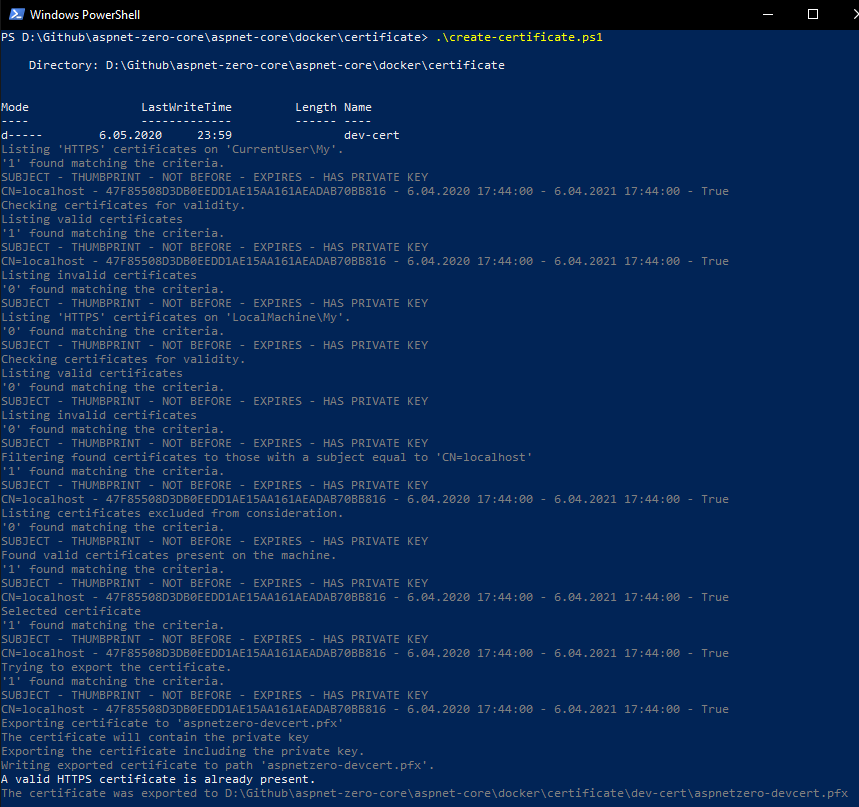 In your aspnet-core\docker\migrator\ folder, you will find run-migrator file to apply migrations for your application. Running the shell script should have a similar output like below.

In your applications .Web solution under docker folder, set as startup project you want to debug. Visual studio will instantly begin building the container. Building containers may take some time for the first time since it will be downloading required base images.

Below you can see docker-compose-mvc debugging: 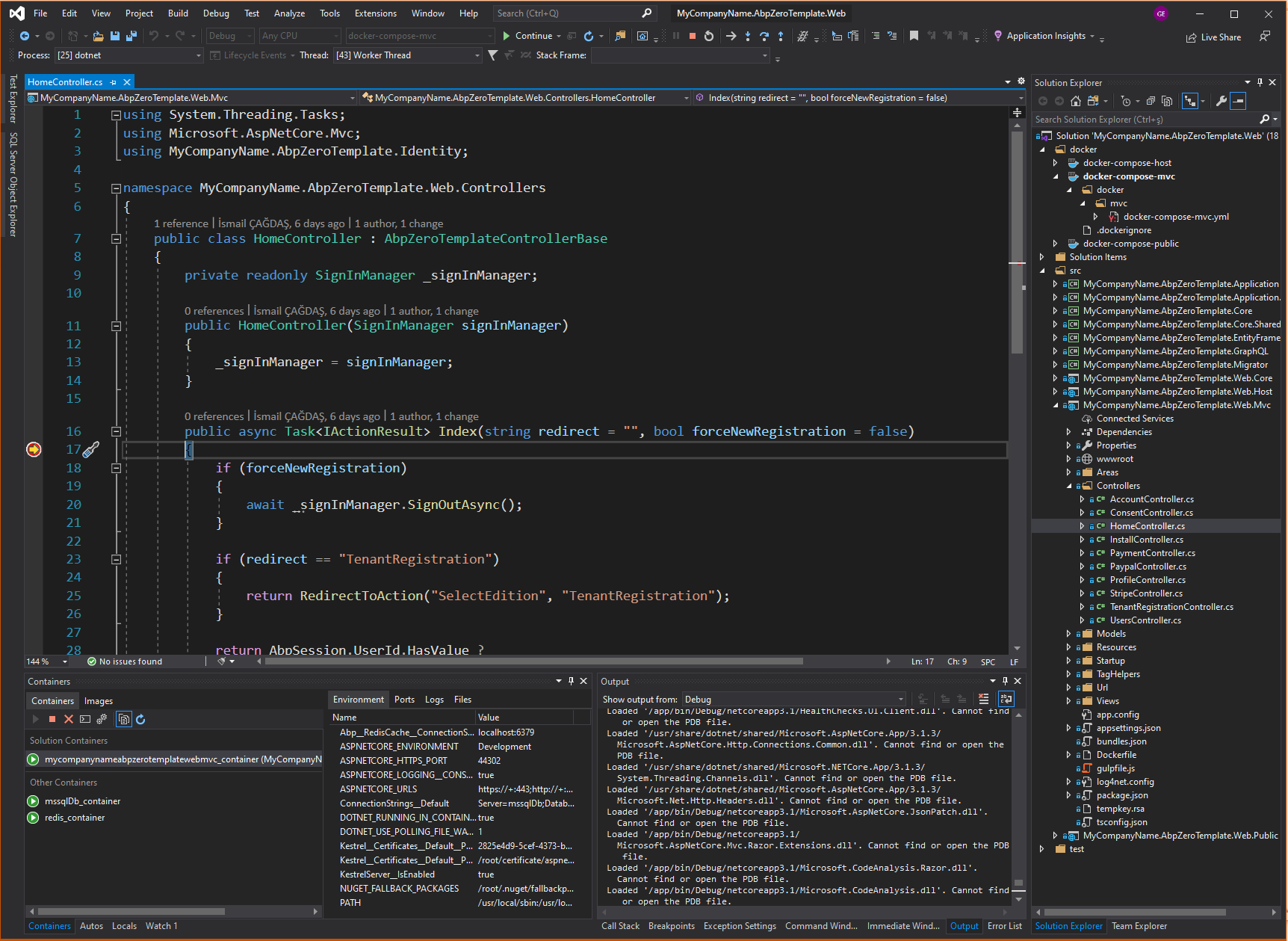 There are three docker solutions you can set as startup project to run;

Each docker-compose files have override.yml files to set the other environments like certification information, docker volumes or AspnetCore environment.

Configuration is separated between docker development and default IIS development.

If you want to change the default connection string when running on containers; you need to change the environment variable ConnectionStrings__Default in corresponding docker-compose.yml shown below:

This environment variable overrides the connection string which has been set in appsettings.json. This way you can use both development environments without mixing up the configurations.

This occurs because the mvc container is still alive even if you stop debugging. To avoid container conflicts, you need to Clean the solution (right click to docker project and clean option) to remove the container completely before running the docker-compose-public which uses common containers like mvc container.